While there are many uncertainties today, you can count on the start of the Minnesota hunting and
fishing seasons. Governor Walz’s stay at home order actually encourages people to get outdoors and
engage in activities that include hunting and fishing.

Whether or not you’re planning to hit the water or the woods in the coming weeks, you can still make
a positive difference for our fish and wildlife today! If your circumstances allow, we encourage you to
buy fishing and hunting licenses and stamps, even if you do not plan to fish or hunt.
Not everyone realizes the management of fish and wildlife by the Minnesota Department of Natural
Resources, Division of Fish and Wildlife, is paid for by hunters and anglers. This is done through the
sale of fishing, hunting and related licenses and stamps, as well as federal excise taxes on fishing and
hunting equipment purchases. This vital work is funded by anglers and hunters. It is not funded by
property or general income taxes.
We in the hunting and angling community have a long history of stepping up during times of adversity
to promote fish and wildlife management and conservation. Some of the best programs operating
today were created in the shadow of the Great Depression of the 1930s.
Many retail locations that sell licenses remain open, and we encourage you to support them. If you’d
prefer not to go out, you can also purchase these from home. Visit the DNR webpage,
www.mndnr.gov or call the DNR at 888-665-4236.
We hope you are able to get outside and enjoy the activities you love. If you do so, please stay close
to home and follow the social distancing guidelines set forth by Governor Walz. Most of all, stay safe.
Thank you. 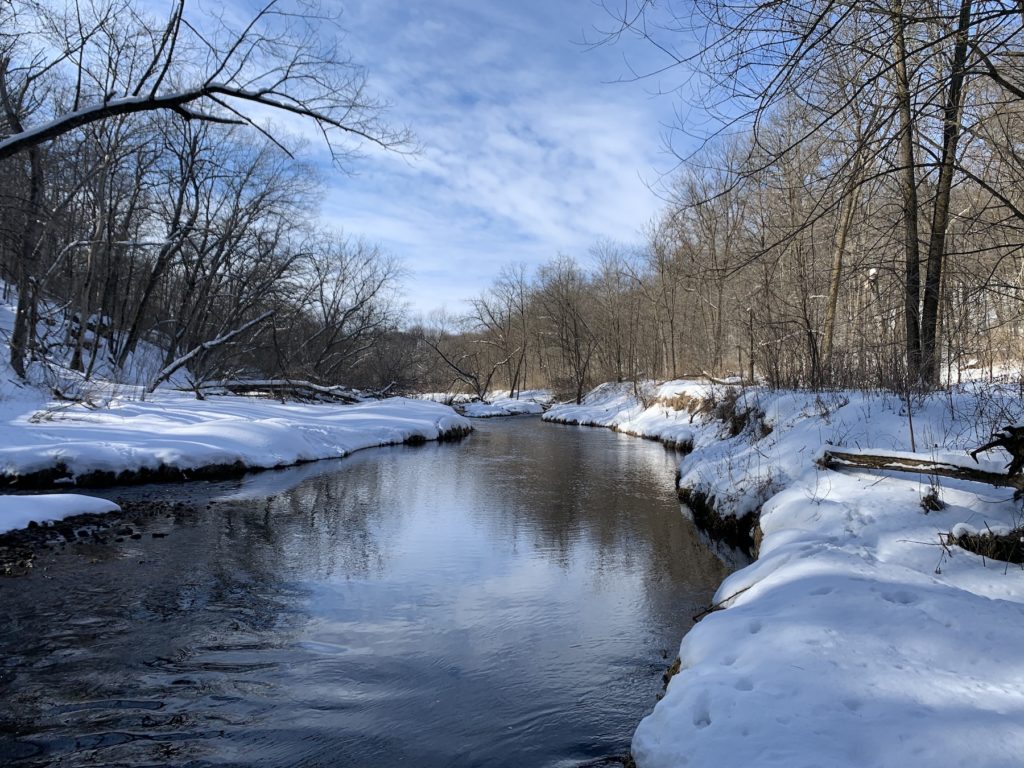 Ventured out with a couple buddies today for my first trip of the new year. We started the day with some rare sunshine and clouds were back overhead by 1-1:30pm. We fished from 10:45am until about 2:30pm.

There were fish rising today, especially late morning in sunny stretches of the stream. There wasn’t enough activity to encourage any of us to try dry flies but a more motivated soul could have done alright, I suppose.

Fish were caught on Hare’s Ear, green and purple perdigons, small pheasant tails, and midge larva patterns. Despite a few rising fish, getting flies low enough was key to catching. A few fish were feeding in some of the faster runs, but most were in the slower tails.

Saturday, March 7th Report:
Fished from 9:30am-12:30pm. Sky was clear, wind in the valley was a non-issue (gusty on the blufftops), temperature started at 32 and was ~38 when we walked out of the valley. There was still plenty of snow on the banks and ice shelves in a few stretches. Fishing was slow, but there was one stretch with ample sunshine + emerging midges that brought fish to the surface. This was a first outing for 3 of us fishing, each caught our first trout of the year on a Griffith’s Gnat (and a couple more to boot). In this particular location, fish were up in the current, actively feeding. Additional fish were caught on an orange scud. In many other stretches that were still shaded, we caught nothing despite our best efforts.

The catch-and-release season on the majority of southeast Minnesota trout streams is now closed. This year was the first to be extended from the end of September into the middle of October.

However, there is still trout fishing to be had in a few of southeast Minnesota’s state parks. Here is where you can fish in Beaver Creek SP, Whitewater SP, and Forestville SP.

All of southeast Minnesota’s designated trout streams will be open on January 1st, 2015 for the catch-and-release winter season.

…and offer more opportunity are finally moving forward (not taking effect, yet, so your usual winter trout season rules still apply through this winter season). After a dramatic pause, one years in the making, we’re a little more than a month from the proposed changes becoming regulation. About 4 years ago, the DNR held numerous open houses to discuss simplifications of regulations and more angling opportunities in southeast MN and there has been overwhelming support between the meetings and written response.

While the ball is in motion, for now, we wait. The DNR will adopt the regulations without a public hearing this spring pending there isn’t much pushback.

There has been chatter for a while now regarding potential changes to regulations and extending trout seasons in southeast Minnesota. It is now open for public comment until February 11th, 2013. (thanks for the info, brntrout)

Below is the notice for public comment from the December 10th, 2012 edition of the MN State Register. I’ve highlighted the proposed changes in regulations applicable to the trout-y folk.

Licenses and Permits
Repeal obsolete rules in Chapter 6212, subparts 6212.0100 through 6262.1300 due to the development and implementation of the electronic licensing system. These rules are either no longer pertinent to the sale of a license, or are covered in Chapter 6213.

Official Notices
– Consider other water bodies for catch-and-release seasons for sturgeon.
– Clarify the rule or make them consistent with other laws.
– Change or add to existing fishing regulations to reflect recently enacted statute changes, make other existing emergency rules permanent, or eliminate obsolete or redundant rules.

Border Waters
– Changes in spearing rules and clarifications of angling rule for South Dakota border waters.
– Changes in regulations for the Minnesota border waters to make them consistent between the states, especially those that
are now different on the Iowa and Wisconsin borders.
– Changes in regulations on the Canadian border to either make them consistent with inland regulations or standardize opening dates for specific water bodies, including walleye on Basswood Lake in Lake County.
Aquatic Plants
– Eliminate obsolete or redundant rules that are part of the standards for aquatic plant management permit issuance regarding lotus protection. 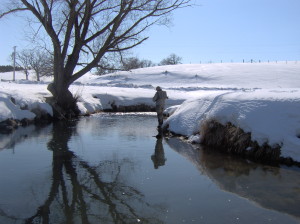 Winter Trout Season is now open in southeast Minnesota. Just go! And layer up. And don’t keep any fish – it’s only open for catch-and-release. If you’re new to the idea of winter fly fishing for trout, I recommend not getting your hopes up for the catch rates of spring and summer. While springs keep our trout streams open, even on the coldest days, lower water temperatures this time of year mean a lower metabolism for fish. Midges, scuds, small PT’s are the usual, winter fare.

Make sure you know the regulations and which streams are open. There are still only select streams open for winter trout season. Have you heard Trout Run is open for winter fishing? It’s not. At least not the one you’re thinking of in Fillmore County with the famed Bucksnort Dam. There is a little stream in Whitewater State Park also named Trout Run – that’s the only Trout Run open for the winter season.

Stream conditions? The usual winter fare. It’s a rare winter’s day that our trout streams are anything but low, clear, and cold. If you’re uncertain, check here or here to see if there’s an update.

Reports, pictures are always welcome on the message board.

There are new links across the top of this site. I’m working on getting stuff updated as quickly as I can, but there will be some blank spots for a while.

This website is simply the home base for a forum which has been in existence for many years. What is now Minnesota Trout Forums used to be … ahem… something like Minnesota Trout Forums but located at driftless-skies. I never really liked that URL, it seemed too vague and …wait, what? You’ve lost my attention. Anyway, prior to the message board being titled “Driftless Skies” or something like that, it was at one time the Minnesota Trout Unlimited, message board which I administrated for years. Ultimately, as with many message boards, the repeated flame-outs reflected negatively on an overall positive, volunteer organization. The spirit of the board remains intact. It’s a forum for trout a-fishy-anados who hold a strong passion for the conservation of our State’s great outdoor heritage, namely, in our case, Minnesota’s coldwater resource. It’s not that we despise other realms of fishing or the outdoors, but mainly, this is for the trout people.

I’ll be working on this website and on the forum, trying to spruce things up around the joint and provide some fresh content. I may need your help at some point, whether it’s communication from all corners of the state or with maintaining the costs of hosting. For now, I’ve whittled things down and will build up from there.

Ultimately, this will be a productive, friendly place to discuss trout, fishing, trout fishing, fly tying, and more often than not, from the foundation of a conservationist. I encourage everyone to take part, and I have no patience for repeated flame-outs on the old, sore subjects. Speak your mind and your passion, but personal attacks will not be tolerated. If you can’t state your case without demeaning someone else, you’ve lost your case.

Enjoy, and have fun.