Due to a number of scheduling conflicts, this year’s Trout Camp had to fall on the same weekend as the catch and keep opener. As frightening as that was, it turned out to be much better than I anticipated. The campground and the streams were busier than usual on Friday through Saturday, otherwise everyone cleared out rather quickly Sunday and we didn’t see anyone else out fishing on Monday. Overall, great friends, good fishing, and a welcome reprieve to a river valley with no cell phone reception. 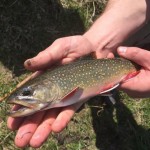 Friday: the weather was amazing, maybe even too warm with the lack of wind although we didn’t have too many complaints. First fish, first run, first cast – great start to the day. On an upper reach of a spring creek, water temperatures stayed around 48 degrees despite air temperatures in the mid-70s and full sunshine. The catch rate was fair to good. Fish were caught on peeking caddis size 16, caddis larva size 16, pink squirrels, orange scuds, copper johns, and pheasant tails. Farther downstream in the afternoon there were quite a few caddis bouncing around on the water. Unfortunately, despite the hatch, there were no rises seen, very few fish caught, and very few fish spooked. Something seems amiss through that popular stretch of water. 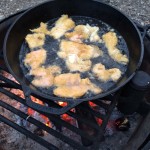 Saturday: opening day. We ventured into the big woods south of I-90 and fished a relatively popular stretch of water. Every access point was loaded with about 6-8 cars when we arrived, which we expected. 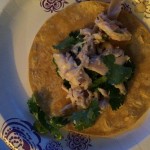 What I didn’t expect was the majority clearing out of the stream before lunch. The water temperature was 58 degrees on this stream; warmer than the waters fished previously. By the end of the afternoon there were very few people left fishing. We caught a lot of fish, kept a few, and had an amazing dinner of fried trout filets, trout tacos, and altogether too much to eat. I hadn’t fished on opening day in at least 10 years and it was well worth the extra effort. 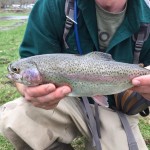 Sunday: we took a long walk on a cold stream and caught a few fish. There were showers, but not much rain, it was overcast and cool with temperatures in the 50s. The fishing was difficult through the morning although we did catch a handful right out of the gates. The fishing picked up a little in the afternoon. Fish were caught on midge larva, copper johns, peeking caddis, and san juan worms. A few, nice glory fish were caught in front of the camping onlookers who said those were the first fish they’d seen caught all day. This was another stream that seemed to have a much lower population of fish, and that was confirmed by recent DNR shocking statistics. One of the highlights of Sunday was catching a handful of nicely-sized rainbow trout that had been planted in years prior as yearlings. They put up a hearty fight and were a pleasant surprise. 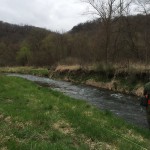 Monday: it was the worst weather day of camp, but the fishing was close to the best of the 4 days. We ventured far back up a river valley and saw no other anglers the entire day. Fish were still actively feeding up in faster water although no hatching insects were seen above water. Successful patterns included a variety of nymphs, midge larva, woolly bugger, and that stinkin’ worm pattern.