I think I should admit, right here at the start, that I have an aversion to fishing small flies.  Oh, I’ll fish with them if I have to, like during hatches of BWOs, midges, or other tiny bugs.  If that’s what it takes, I’ll do it, but during an average trout fishing outing in the Driftless, I rarely tie on anything smaller than a size 12.  My experiences have taught me that not only do larger flies do just as well as smaller flies when “prospecting” for trout, they also have added benefits that smaller flies do not. 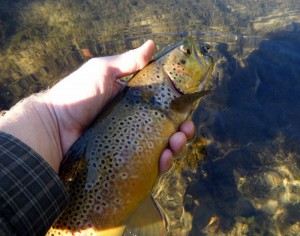 ine that as size 12 & up…are often more “attractive” than smaller flies, leading trout to move quite a distance to take the fly.  I’ve seen this numerous times with both dry flies & nymphs.  My favorite dry fly, the Slurpster, is a monstrous size 8.  I’ve watched fish move several feet & even halfway across a decent sized stream to take this fly (<–see pic!).  I’ve not had the same reaction with smaller, more standard dry fly patterns.

It can be the same with larger nymphs as well.  I remember one occasion filming an episode of “Northland Adventures” with Dave Carlson.  I had advised Dave to put on one of my larger nymph patterns for this particular stream.  He insisted on using a size 14 Pink Squirrel, which is a great fly, no doubt.  Well, after several drifts through a nice run with zero takes, Dave was ready to call it a day.  I asked if I could have a shot at the run before we wrapped it up & he said sure.  I had on a large, size 6 or 8 rubber legged nymph & on the second or third drift hooked & landed a beautiful 19 inch brown, which was captured on film.  After releasing the fish, I made another series of casts higher up near the head of the run & hooked another large brown that got off.  My guess is that the smaller pink squirrel just wasn’t worth the big trout’s effort to swim up & grab.  Either that, or it went unnoticed in the swift current.  The big fly, though, did the job well.

I believe that larger flies also attract the larger fish within a school or pod of fish, leading you to catch fewer really small fish.  I’ve noticed this with nymphs in particular.  A size 12 scud is very effective at catching average & above average sized trout, but I catch very few of those little 4 to 6 inch trout that can be common (and annoying) when fishing smaller nymphs.

Lastly, I’ve also found that larger hooks sizes do a better job of physically hooking the fish and keeping it on the line.  I guess that is pretty self explanatory!  Even switching from a size 14 to a size 12 has increased hook-ups for me, both with dry flies & nymphs.  My favorite streamer pattern, the Bent-Head, is not a giant fly by any means, but it is larger than many trout streamers, and has a large hook gape for its body size…it practically hooks the fish all on its own.

You may think that larger hook sizes might lead to a chance for greater harm coming to the fish.  This has not been my experience.   With the larger streamer hook, it seems that the trout are less likely to take it deeply, as most of the fish I catch are hooked in the jaw, rather than the throat.  With the larger dries and nymphs, when a fish is hooked a little deeper, there is more hook to grab onto with a hemostats & so in that regard are actually easier to remove than a smaller, more obscured hook.

So, this season don’t be afraid to try a larger than average sized fly.  You might catch fewer small fish, but your catch rate for average or large fish might increase.  And, for me at least, nothing beats watching a nice trout inhale a big ‘ol dry fly that you don’t have to squint to see!