As of March 6th, the snow depth at the Rochester International airport is over 12″ for the first time since February 16, 2011. The recent snowfall varied from 5-12″ across southeast Minnesota. The highest totals were reported in northern Goodhue, eastern Wabasha, and eastern Winona counties. March 5-6, 2013 snowfall totals.

I got out for a couple hours this past Sunday, prior to our fresh layer of snow, and fishing was pretty good in the afternoon despite being on the downhill slide of stream temperatures. As expected, catching was more productive where sun was hitting the water as opposed to shaded, colder portions of the stream. There were midges on the snow, not swarming, but plenty, and there were a few trout rising in slower water downstream of a few riffles/runs. The water was only slightly stained, and air temperatures were around 28-30 degrees from 2-4pm. I caught a handful of fish on a skinny nelson and one on a rainbow scud. 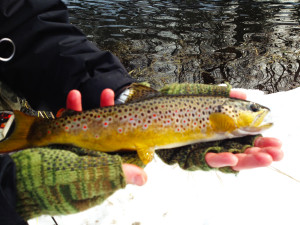 Any reports on recent outings are appreciated on the message board.