This is a pattern based off of, but somewhat varied from the Shillinglaw Emerger pattern in Ross Mueller’s book Fly Fishing Midwest Spring Creeks.

Here’s the recipe I used for this fly today…note it’s not going to be exactly like the pattern in the book, nor is it as pretty, but we’re in the ballpark. This fly is intentionally “buggy”. (that’s my excuse and I’m sticking to it)

Hook: standard nymph, size 18 (I’m out of size 16 hooks today, otherwise I’d have gone that size)
Thread: dun or olive or black or neon orange (maybe not the orange)
Tail: wood duck or mallard flank fibers
Ribbing: strand of pearl krystal flash (or wire, or french tinsel, or something else shiny)
Wing: CDC or Dun Z-lon
Head: Dark and buggy…these were tied with a dark flash dubbing, but the recipe in Mueller’s book calls for “australian opossum”. Black nymph dubbing works fine, too.

Thread hook, tie in the tail. 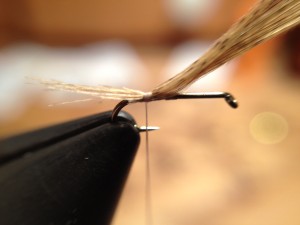 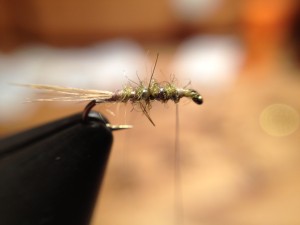 Tie in the wing, secure with a couple wraps, and dub the head. Half-hitch or whip finish…done. 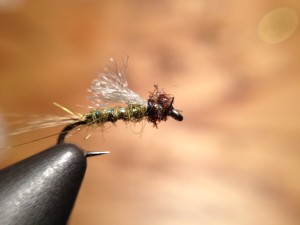 I did a little variety today and trimmed amounts of z-long in the wing so some were bushier than others. I also varied between a dark rainbow dub and a plain, black nymph dub. 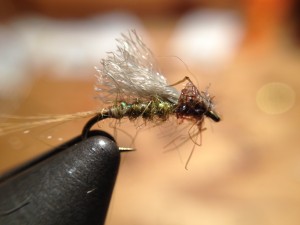 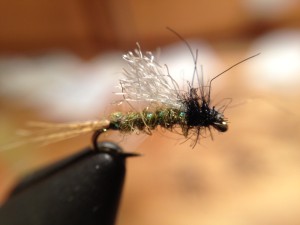