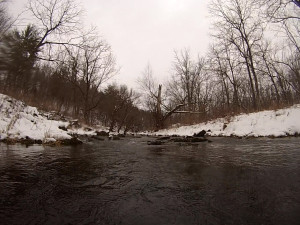 I fished a popular winter trout stream north of I-90 Thursday afternoon. Temperatures hovered in the mid to upper 30s and at the bluff tops there was a stiff wind, but in the river valley I felt hardly any wind. Skies were overcast but polarized shades were still necessary.

There was a very minor midge hatch. In a few hundred yards of stream I saw 3 fish rise…not much to get me giddy, but a clear indication that a midge trailer behind my scud would be wise. Did I do that? No…too lazy yesterday.

Water was slightly stained (image above from a 1.5ft deep pocket of water) but plenty of visibility, seemingly due to the slow snow melt. The thaw in southeast Minnesota has been occurring slowly for a few days now but has visibly sped up since rain started Thursday afternoon and temperatures have remained above freezing overnight. 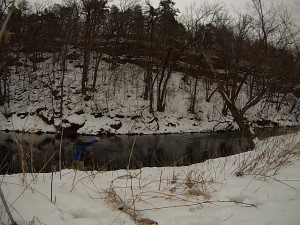 Fish caught were on an orange scud, size 14, and bites were very subtle, to be expected in winter season. Keep a tight line, dirty nymphers. I only fished for about a half hour as I was also messing around with my new GoPro camera that Santa brought me for Christmas. I’m working on a little video for the trip report.