Cleansing of the Tying Desk

In the following pile of stuff which was located mere inches away from my vise, there was a diamond in the rough. I’d been looking for extended-shank, bent hooks, and I could swear I’d bought some TMC 200R hooks at some point and wanted to tie up some midges with that hook. Lo, an angel of the desk appeared and directed my eye to one, lonely curved shank hook.

So I tied up an olive midge on said hook, which made me happy, but it just wasn’t enough. I needed more. The only solution, at least in my mind at this moment of madness, was to…ahem…clean. Ouch, it hurts to type that.

So clean I did, and I was amazed at what I found. I don’t even know what this is, what it did, or how it made its way on to my desk. 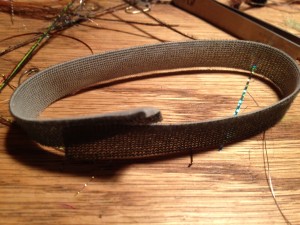 I actually put some of the materials on my desk back into the unorganized drawers from which they came, and in so doing found other stuff I’d forgotten about. Wait, why again do I have a box of 6/0 Big Game saltwater hooks? They’ll go to the first person who says they’re interested. 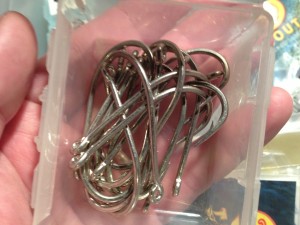 And another gem of a find, and this one was hidden in plain sight, right on my desktop! Seriously, I had no idea where I got a box of 50 size 18 nymph hooks, honestly no clue, and they were right by my lamp. I’m not much of a Mustad guy, but they’ll do. 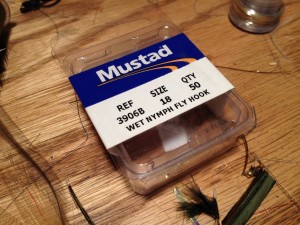 After relocating (putting away) a copious amount of crap and throwing away an equal amount, I was left with this, and could actually wipe away the dust without creating a hook-filled medieval torture device of my rag. There are still things to put away, but I like my hooks within hands reach…yeah, that’s it…hands reach.

By the way, don’t think I’m losing my edge on being a disorganized, crappy fly-tier. There are still tiers of disorganized stuff on The Disaster. I can just see a bit more clearly for the next few hours…

2 thoughts on “Cleansing of the Tying Desk”