We’ve had a discussion re: Simple Baetis Fly patterns and recipes revolving around such. The Skinny Nelson and minor variations of it have been part of the discussion, so I sat down to tie that one in particular. I think I’ll tie enough to fill up a row to keep as a staple fly, and after this round will tie the simple pattern discussed at the top of the thread next.

First attempt…not bad, it’ll fish, but I don’t like that my tail is too long and the head ended up too block-headed behind the eye making the thorax look a bit too big. 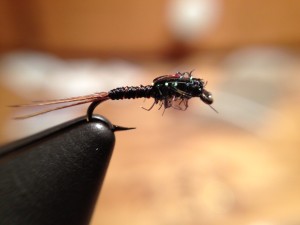 After a few tries I ended up with something I’m a bit more happy with – better tail dimensions and tapered front. Don’t get me wrong, the other versions will still make my fly box and I’m sure they’ll catch fish, but I’m working on tying better looking flies. 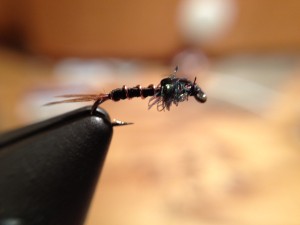 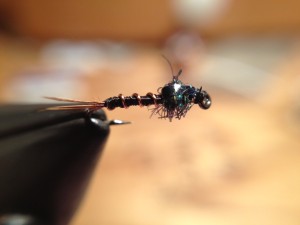 Here are the details:

Following the recipe and instructions here, I tied this a little differently than I would my typical PT-style nymphs, and may continue to follow this route since it seems, intuitively, that it would offer a more even look along the fly body and more durability. I’m not sure if that’s the case, but I’ve been tying in ribbing right at the tail and not securing it along the length of the shank in the past, which gives the fly more junk in the trunk, and who likes a fly with a big butt?

Tie in thread behind the eye 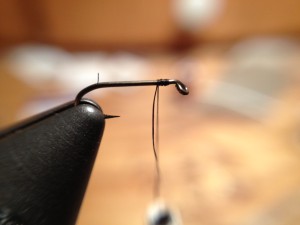 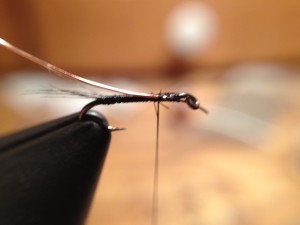 Wrap thread over the copper wire toward the bend of the hook along the shank of the hook, then wrap thread back to behind the eye once again. 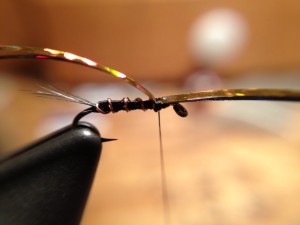